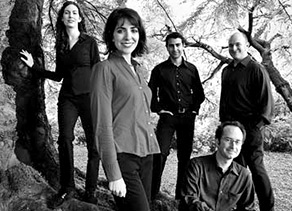 Monika Jalili (Noorsaaz Lead Vocalist) is a classically trained vocalist born in New York City with a degree in Vocal Performance from The Manhattan School of Music and in French Literature from Columbia University. Monika has been a performer on stage and screen since the age of 12. Her performances have taken her to Lincoln Center, Carnegie Hall, Symphony Space, The Producers Club, The Tchaikovsky Concert Hall in Moscow, The Moscow Conservatory of Music, The Starlight Roof at the Waldorf Astoria, The Wortham Center (Houston), Wolf Trap (Virginia), The Shubert Theatre (New Haven) and venues throughout Europe, and around the US. She has appeared with such talents as Steve Allen and John Astin, and has performed and been interviewed on Iranian television and radio from studios in Los Angeles and aired worldwide. Monika was a student of the late Beverley Peck Johnson. She is fluent in German and French and is progressing steadily with Persian. Monika’s great love of Persian music and culture led her to create NoorSaaz.